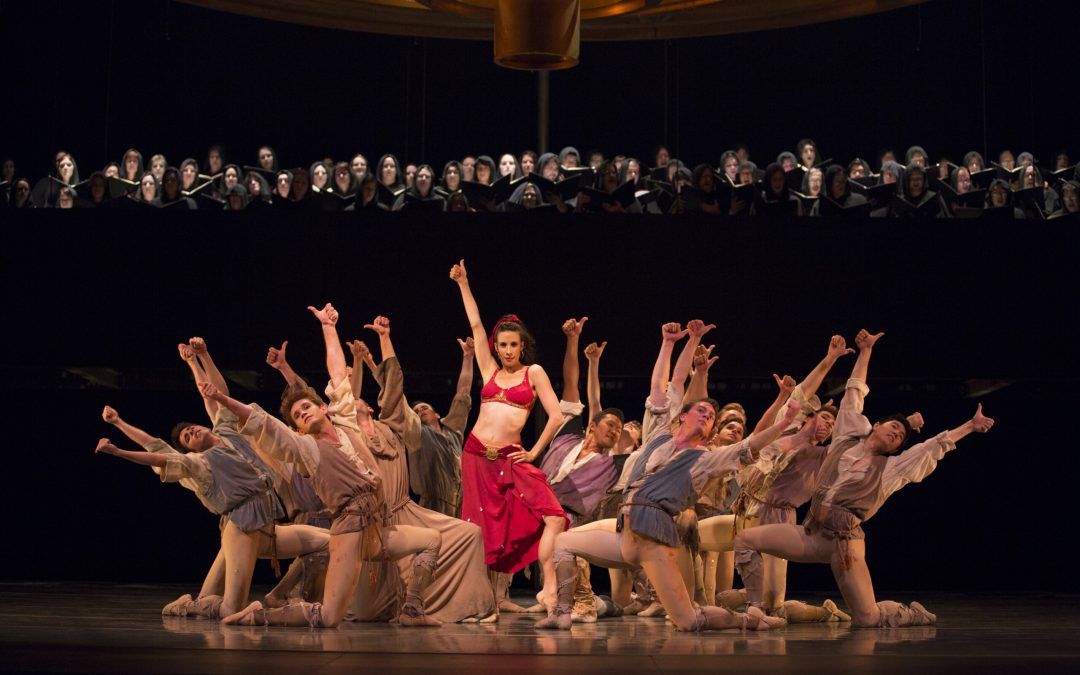 One of the most memorable pairings of the evening was Angelica Generosa and new principal Jonathan Batista in Allegro Brillante. Daring and showy, both appear committed to each other and to the dance, no matter what the challenge. Multiple turns, pas de deux with massive extensions, precise and strong attitudes, Battista’s breathtaking ballon.

Generosa is properly playful in her turns, working with the tempo, and sometimes teasing with rhythms. Her warm facial expressions invite the audience into the dance in a special way. There’s plenty of Balanchine arms, with tension most deliberate. In very quick lifts, they play with dynamics, commanding the attention of all.

Pacific Northwest Ballet Carmina Burana’s evocative music, dance, sound, lighting, and costumes delivers best what audiences want to see—powerful theater that mesmerizes viewers with an explosion of light, color, sound, and physicality. This is Kent Stowell’s big and sharp dancing, one of his best ballets, integrating brilliantly with the orchestra and chorus in Carl Orff’s dramatic, other-worldly score. Pacific Northwest Ballet’s fall production did not disappoint.

The opening scene, with men prostrate, bursts with the energy of synchronized moves, reminiscent of the power of Maurice Béjart’s choreography for men.

When the chorus kicks in, we’re in a world of medieval texts and times. The movement then breaks into a series of quiet duets, music softens and limbs lengthen. A strong pas de trois, with bells signaling, becomes some call to action. Ezra Thomson’s movement is relaxed, Miles Pertl, elegant. A moment of calm before the raucous Taverna scene with its bold cast.

Kyle Davis is eminently watchable, as a tortured soul, and as any character. Then comes an ethereal duet—Lesley Rausch and Lucien Postlewaite. Their arms are graceful, as if they have an intelligence of their own. Some moves are impressively extreme and emotional. Rausch dances with her wrists, her jaw, her ribboned hair. Postlewaite is the quintessential partner, his entire torso responding to Rausch. Theirs is a partnering of great sensitivity and connection.

The finale is signaled by a frantic crescendo. Fate is impulsive, erratic. The wheel is turned, and dancers and players are moved around in unpredictable ways. The simple moves belie the serious messages, much less the challenges of coordinating music and singing and dance. But all performers here rally to display the great artistry that this ballet demands.