Agon has quite a different feel. Dancers, in simple leotards and tights, are utterly exposed–there’s nothing and nowhere to hide. The dance demands extreme stamina, strength, flexibility: virtually every move is daunting. Stravinsky’s score is impossible to count and both music and dance demand a precise exactitude.

In this puzzle of a dance, the dancers stretched into each position. Shout outs to Biasucci and Murphy for dancing “out” rather than “in.” The piece could be rather grim, with the dancers trying to fiercely remember all. Instead, these dancers made the moves look easy, straightforward, inevitable–intricate contortions that seem so natural. Just like these two dancers, Pantastico and Tisserand, too, were extraordinary for their clear intent and sense of purpose. 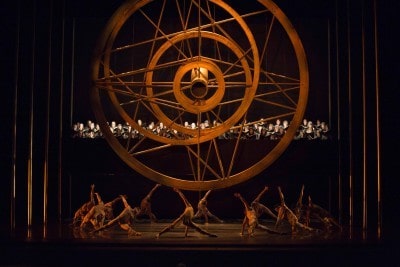 It was Orff who worked from a collection of medieval prose discovered in the early 19th century at the monastery of Benediktbeuren.  Carmina Burana is literally “Songs of Beuren”–and  they are sensual. The cosmic mysticism suggested by the monastic works was not lost on Stowell–some of his choreographic patterns are based on the esoteric “12.” But also important was the force, aesthetics, power of Carmina Burana‘s core men. The group dynamic also is strong, conveying a deep, unstoppable force.

Amidst all this, Ezra Thomsen and Angelica Generosa created a calm, sweet moment in some Beltane countryside. Cecilia Iliesiu and Elle Macy (in a second cast), much more bawdy.  All the dancers, however, were fully engaged in telling this compelling tale–building up to not just the “cour d’amour” of stunning dancers Elizabeth Murphy and Lucien Postlewaite, and Laura Tisserand and Dylan Wald, but also the entire cast’s spectacular finale of the “fortuna imperatrix mundi.” Technical skill is not enough. Here, only deep commitment to the music, the movement and the message is what drives the story and the drama of which the audience never tires.