Indeed, Configurate offered new works with the objective of inspiring “love, compassion & empathy,” according to the program notes – and such is what the choreographers delivered. The dancers must have taken notes, for their total commitment to the program was a major part of what made it so memorable.

In the first piece, Gabrielle Lamb’s Joinery, the production elements – the stenciled lighting, the music collage, the attractive powder blue and light grey of the costumes – combined to produce a piece I would want to see again and again. The piece had the look of contact improv, while conveying intensity and emotion, even in the smallest of statements. The ensemble movement was beautiful, meaningful, and deliberate – as if moving through thick air – push, pull; push, rebound, falling in and out of intriguing patterns. This gentle dance was like some sweet conversation. Shout outs to Karl Watson who was mesmerizing to watch, Tory Peil for her commanding leg extensions and measured moves, and Jim Kent, one of the most musical dancers in what is an extremely musical group. Accolades to Michael Mazzola, who conceptualized and designed the lighting. 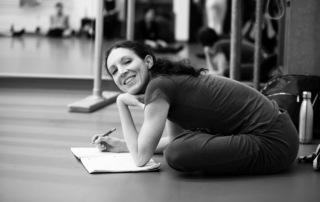 The second piece, Olivier Wever’s 6 Love Letters was just that – a very tender duet with Jim Kent and Karl Watson, a humorous offering by Peil and new dancer Adrian Hoffman, a moving triplet with Liane Aung, Mia Monteabaro, and Peil, a unison pastiche with Kent and new company dancer Cameron Birts, a lively duet with Hoffman and Birts, a gesture-driven duet with Watson and Aung.

Kent and Watson’s lifts were intimate (with Watson doing the heavy lifting), bodies lumbering every which way, sometimes scraping the floor, with Kent luxuriating in Watson’s embrace. Peil and Hoffman danced in their own separate worlds, yet seized the opportunity to cradle each other.

Kent and Birts’ duet was strong – the unison dance was perfectly delivered, the solo movement, committed and coherent. Birts is an excellent match for Kent’s exquisite dancing. Birts had another chance to show us his smooth moves in a duet with Hoffman – offering dozens of ways to locomote and to gesture – brilliant moves from choreographer Wevers. Next up was Watson and Aung, offering arms Balanchine-esque, as the dancers turned and twisted around each other, limbs active even as Aung suspended in a lift. All performed in attractive maroon tops and short, short burgundy satin shorts to a taped piano score. The scenic design consisted of lighting sticks (LED strips of light), spelling out parts of the letters for “LOVE.” 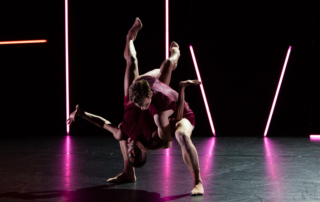 The final piece on the program, the allegorical Seed by Ihsan Rustem, was a knock-out. Ihsan created the soundtrack with heart beat sounds and interviews with the dancers themselves.

It’s nothing less than a birth through death experience, all in one hypnotherapy session – for an individual, Watson, from the time he exits his creator’s body, through to being watered and otherwise nurtured, to being mature enough to engage in a strong duet with Aung. Like clay in the hands of a sculptor, Watson and Aung moved beautifully with each other’s touch – a testament to the nurturing that helps to define us.

Even though Watson is a centerpiece of attention, Hoffman and Peil, Hoffman and Watson, Birts, all danced BIG to both the vibrato and sweep of the music. The piece offered an effective use of unison dancing, flowing and continuous movement, and especially unpredictable phrasing. This piece – sometimes fusion, sometimes more like intimate touch, other times stage running – captured the audience’s attention. Loose costumes allowing for the free movement of the dancers, designed and constructed by Mark Zappone, compelling voice overs of the dancers themselves, terrific stage lighting, and gripping percussive music combined to make for a fitting close to a most wise, loving, and empathetic Configurate.